A little weary, a little sparkly 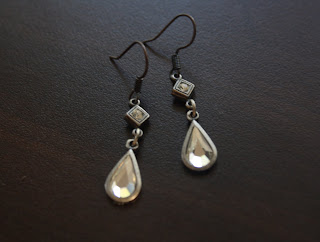 Featuring a pair of vintage silver toned, oxidised metal dangles that I have converted into earrings with bronze tone ear wires.
Posted by Amber & Wood at 16:12 1 comment:

What do you see?

The latest necklace that I listed on http://felt.co.nz/shop/lindensage features a solid brass pendant with incredible filigree detailing. I don't know the age of the piece but most likely from the early to mid 1900s. I believe that they were base stamping components for jewellery designs.

The lady that I got it from says that the piece was a "coppery" colour and not so pretty. So, it was subjected to her altering process. She applied her gold leafing technique and then applied antiquing solution and sealed it. It is finished on both sides and the end result is the golden patina beauty as pictured.

I see "a wing" or "an intricate pendant" or "a butterfly". What do you see? 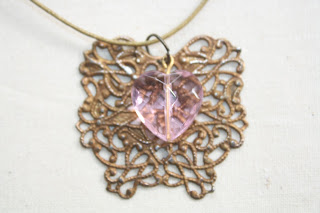 In view of the long weekend, I know many of us have crafty projects lined up, or at least, are thinking of attempting to create something. Well, I'm going to attempt some sewing and recently, while reading Crafty Chica's Guide to Artful Sewing by Kathy Cano-Murillo, I came across her list of movies that showcased sewing on the silver screen. So gather everyone in the family for some popcorn and sewing!

Nacho Libre (2006)
Lucha libre costumes, masks, and a party suit all made in a church orphanage

Gone with the Wind (1939)
Emergency dress made from drapes

The Color Purple (1985)
Woman empowers herself by designing trousers

The Sound of Music (1965)
Kids' play clothes made from drapes

Enchanted (2007)
Day dresses made from drapes

Amber & Wood
I love collecting vintage treasures that can be used for arts and crafts and decorating. My handmade accessories are a combination of flea market finds, my personal collection and new treasures. My designs are tactile and fresh, combining layers, embellishments and textures. All put together with contemporary findings to create unique sophisticated pieces. I ship worldwide.